Imagine you’re seated with your friends or acquaintances then you happen to discuss about hobbies. Inevitably, one of you happens to mention something to do with airsoft. With amusement, you happen to be like “Wait-Isn’t airsoft and paintball the same thing”? At their core, these two games have distinct similarities in that they’re both shooting games that require you to shoot at your enemies. But despite sharing some key similarities, these two sports tend to be like oil and water due to the many differences they tend to have. As a result, most devotees have been left stranded on this heated debate of paintball vs airsoft.

Although there has been a consistent discussion between these two sports, there are several distinctions that make them different from each other. In our discussion today, we will be looking at some of these prominent characteristics that distinguish these two fun combat sports.

Paintball is a more relaxed shooting game that allows players, either in teams or individually, to compete against each other by shooting. The game is usually played outside in fields of varying sizes. The field is usually scattered with natural or artificial barriers to providing some hiding spots for the players. The game is played using paintball guns and paintballs that are made of non-toxic, biodegradable and water-soluble polymer that’s totally harmless to your health.

Airsoft on the other hand has immense similarities with paintball only that it’s more focused on military simulation by using more realistic warfare experience. In paintball, the guns look less realistic. In airsoft, the RIFs (Realistic Imitation Firearms) used is 99% real making them almost indistinguishable from the real firearms. Other than the firearms, players in airsoft usually dress up in more realistic military gear making the game appear more realistic.

When playing paintball sport, there are rules and regulations that each player must adhere to. Before starting the game, players must take a walk through the field to establish the playing area and the dead zone.

Once you’ve marked the field, the next step is to decide the game objective. This is where you’ll decide the game you’ll be playing then set the rules for the game. Next, create equal and balanced teams by diving yourselves. Make sure that you mix the players carefully to avoid having a team with more experienced players as compared to the rest.

Lastly, establish the rules for the hits. In most cases, hits are counted when a player is hit and the paintball leaves solid marks of paint on their gear. Sometimes, when a player is hit, especially on the back, it can be hard to realize whether you’ve been hit or not. In such cases, a player can should “paint check” to stop the game temporarily and allow players nearby to check for any signs of hits.

In case the player is hit, he/she must exit the game immediately. From there, each player must get back to his/her initial position for the game to restart. Finally, in case a paintball hits a barrier but splashes paint on a player, this is counted as splatter and not a hit at all.

Just like in paintball game, airsoft game requires you to start by marking the field that will be used during play. Now, one major difference between these two games is that airsoft doesn’t use paintballs as paintball sport does. Therefore, this game is based on mere honesty where players must admit by calling themselves out of the game whenever they’re hit.

Once a player is hit, he/she is supposed to shout “Hit” then exit the field by holding their guns over the head. For a player to get “killed”, he/she must be shot on any part of their body or get eliminated by grenades when they detonate on a close radius.

Other than their definition, another area that reveals major distinctions between paintball and airsoft sports is the nature of the guns used. When it comes to paintballs, the guns used (called markers) are very different from actual firearms. The guns are bulky and usually contain a hopper (to house the paintballs) and a canister (for storing CO₂). These guns are less powerful and more cumbersome to deal with as you must take care of the paintball capsules and the air during gameplay.

When it comes to airsoft, the guns used are reminiscent of real firearms used in realistic tactical action. The guns can be spring-loaded, gas-powered, or electric-powered just like actual guns. Depending on your level of experience, the guns used can either be Replica Imitation Firearms (RIFs) or Imitation Firearms (IFs) that are two-toned colored and mostly considered for beginners.

Apart from colored guns, which are mostly used by beginners, most high-end airsoft guns are very similar to actual firearms in terms of physical features. In fact, most of them are operated by loading magazines just like in real guns. Therefore, to distinguish them from actual firearms, users must attach a colored ribbon on their firearms as a way of complying with state/federal laws regarding airsoft sport.

Similar to the weapons, there’s a huge difference between the types of ammunition used in both paintball and airsoft sports. In paintball, you will need two main accessories which are the hopper and the canister. The hopper is that part that houses the paintballs while the canister is the part that holds the CO₂ to provide immense power to shoot the capsules.

When dealing with your marker, you need to be very careful to avoid compromising with the hopper or the canister. That’s because a simple mistake can cause the paintballs to burst to send a messy shed of paint all over your body. Also, paintballs are usually heavy (around 3 grams) meaning the firearms are usually bulkier than those used in airsoft.

When it comes to airsoft, this sport relies on two accessories which are the magazines and the BB bullets. The bullets are made of ABS or PLA plastic and are usually 6mm in diameter with a weight of about 0.3 grams. Unlike paintball capsules, BB bullets used in airsoft do not stain your gear with paint when fired but rather you’re left feeling pain. This, therefore, makes it difficult to tell when a player is hit unlike in paintballing.

When it comes to loading the ammo, airsoft guns allow you to load the bullets using the traditional gun-style magazines. This makes the game more realistic since you won’t have to deal with the bulky hopper and canister as it’s the case with paintball markers.

One major aspect of both paintball and airsoft sports is for the players to stay fully camouflaged during gameplay. In the case of paintball, the sport is less reminiscent of military simulation meaning players can wear overalls, masks, hats, and other ordinary gear so long as they’re protected against direct impact with the paintballs. In short, the game focuses more on safety.

When it comes to airsoft, this game is more of an intense military simulation where the clothing and gear are strict variants that imitate military unit gear. The players must dress similar to real soldiers with tactical gears such as masks, helmets, goggles, boots, grenades, rifles, and lots of magazines. The game is also more tactical because players must dive, crawl and maneuver through muddy terrains to shoot their opponents and eliminate them from the game.

Earlier on, we mentioned about the gun and ammo. Although we only discussed them briefly, these two categories play a critical role in the level of accuracy in your firearm. There’s no doubt that accuracy greatly depends on a player’s skills and shooting efficiency. Though that’s the case, there are other factors that affect accuracy in a great way.

In paintball, the weight of the capsules affects their accuracy immensely. Since these capsules contain paint, the heavyweight causes drag which pulls the capsules back when fired. Another factor is the quality of the paintballs. If the paintballs are of low quality, then it means that the material they’re made of may fail to stand the propulsion force or rather the forces acting against their accuracy.

As a recap of what we’ve mentioned, paintballs are bulkier causing them to move slower when fired. This hence, makes them the best for shooting in closer ranges. On the other hand, airsoft BBs are made of plastic spherical pellets that are light and small in size.

Since airsoft BBs don’t contain any paint, they move at speeds of about 600 feet per second which is faster than paintballs’ 300 feet per second. Due to this reason, airsoft BBs are more accurate as they’re able to move faster on steady projectiles without being affected by drag.

When it comes to the level of pain and injuries in both paintball and airsoft games, there’s a huge debate to be discussed. That’s because some enthusiasts will argue that paintballing is painful while others believe that airsoft is riskier and more painful.

But in reality, who is right and who is wrong? Let’s find out. Now, paintballs weigh around 3 grams. This alone reduces their speed to around 300 FPS. Although they travel slower as compared to airsoft BBs, their heavyweights carry more kinetic energy that hits you with a greater force upon impact. If you’re not wearing padded gear to absorb the impact, then you’re likely to get bruised when hit.

When it comes to airsoft BBs, these pellets are small in size and have weights that range at around 0.28 – 0.3 grams. Due to their small sizes, these pellets travel at high speeds of around 500 FPS making them very accurate. Since these plastic BBs are light, they don’t have the kinetic energy that’s needed to cause serious harm or bruising once they get into contact with your body. However, though airsoft BBs are less painful, they can sometimes cause serious pain and injuries when fired at close range.

From what we’ve discussed, it’s easy to predict which between a paintball and airsoft sport is the cheapest to consider. Starting with paintball, we’ve mentioned that these capsules are made of water-soluble polymer that’s non-toxic. That alone, makes them very expensive to manufacture with prices ranging at around $30 or higher for 2,000 paintballs.

The markers themselves are expensive as they range at around $100. Finally, to power the ammo, you’ll need CO₂ or compressed air that will cost you another around $12 to refill.

About airsoft, the cost of each gun is much cheaper because there’s a huge variety of such ammo in the market. Since the guns here are spring-powered and rechargeable, they’re less easy to deal with since they don’t have any hoppers or canisters.

When it comes to the ammo, the BB pellets are plastic made making it easy to manufacture. When it comes to purchasing the airsoft BBs, around $20 – $30 will be enough to buy around 5,000 BBs making them quite affordable as compared to paintballs.

As you can see, paintball and airsoft are two essentially unique sports that share some similarities and a handful of differences. Although both of these sports are combat based, their rules, roles, and techniques vary immensely making one sport more military-based as compared to the other.

Thankfully, both sports have a high level of excitement that differs greatly depending on one’s preferences. So, if you’re a player that enjoys playing airsoft or paintball, it’s always great to give the other sport a try to test the experience before figuring out which one to choose between the two. 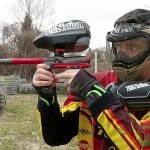